I came to this conclusion a couple of weeks ago. The message was delivered in the form of a guy in a mouse suit on ice skates, and I received it loud and clear when Mrs. Imagethief and I took our son to see the Disney on Ice show at the Workers Gymnasium.

Having a child recalibrates your pop culture consumption habits. Before Zach was born I was all about Led Zeppelin and Michael Bay movies. Even better: Led Zeppelin in Michael Bay movies. Mrs. Imagethief, despite what she may say to you, was pretty much the same, which is why we got married. I have few pop culture pretensions. I have some jazz and such, which I wheel out for brunches because no one other than me wants to listen to “When the Levee Breaks” over mimosas and pancakes. But mostly I was about the loudness and explosions.

I still have my adolescent pleasures, but they’ve been crowded into the margins of my life by The Wiggles, Bob the Builder and Lightning McQueen. Mostly I’m OK with that. The Wiggles haven’t penetrated my workout mix yet, but I don’t have to leave the room when they’re on.

But going to a Disney on Ice show seemed like sailing across some kind of event horizon and beginning an unrecoverable, light-speed plummet into the black hole of pop culture, at the singularity of which one might find such atomized debris as Cop Rock, Kevin Federline and the XFL.

I have no objection to Disney per se. Back in my (nerd alert) laserdisc days I had a respectable assortment of neo-classic animated Disney films. Hakuna matata, dude. And I still go for Pixar stuff, although I suffer from the overexposure to Cars that afflicts every parent of a small boy. As they say, there are no toxins, only toxic doses, and I exceeded a toxic dose of Mater the tow truck quite some time ago. I’m just waiting for my gums to start bleeding.

No, what I resisted on some visceral level, as I might resist a box of candy-frosted frog eyeballs, was the idea of Disney on Ice. With the exception of hockey, which, like Michael Bay movies, is redeemed by violence and thuggery, it’s hard to think of any performance that is improved by putting it on ice. Conceivably NASCAR and political debates (especially if the candidates get hockey gear), but after that, what? Hamlet? Radiohead? Even Olympic figure skating is really just the speck of sanitized-for-mass-consumption flotsam at the top of the vast, reality-show swamp that is everything else having to do with professional figure skating. It’s the back room stuff they should be broadcasting. Remember Tonya Harding?

Despite the evidence supplied by my Michael Bay habit, I am sure some readers have concluded that I am some kind of rarefied cultural élite hopelessly distanced from the entertainments of normal people. After all, I spell “élite” with an “é.” But that’s cool. It’s my over-educated, west-coast leftnik pedigree, and I’ve come to terms with it and the conflicts that it has engendered. If I want to scoff at Disney on Ice over the chardonnay and New Yorker that I use to kill the time between pyrotechnic robot movies, I damned well will.

Nevertheless, I went to Disney on Ice because when you have kids what you and your chardonnay want goes straight into the bin and what your kids want pretty much becomes the yardstick by which all recreation is evaluated. Hence my chronic Matertoxosis. So off we went.

Actually, it was pretty good fun.

No, really. As a parent you gain a certain appreciation for anything that can hold a three-year-old’s attention for ninety minutes. But despite the many layers of corporatism wrapped around it, it’s hard not enjoy a multi-villain extravaganza featuring Cruella DeVille, Jafar, Maleficent and about four other fiends in colorful hats.  I also added Disney on Ice to my expanding list of oddball things that now make me get all teary.

But what really struck me was how successful the show was. They’d sold out the Worker’s Gymnasium and the seats were packed to the brim with Chinese kids, apparently all of whom had successfully argued their parents into springing for the light-up wands and inedible cosmo-sausage they were hawking at the mezzanine. Scalpers were doing a good trade on the way in. Whatever else is going on in Beijing, people will pony up for Disney on Ice.

The only content that referenced China was two minutes of Mulan, who ranks in the Disney pantheon about where Jar Jar Binks ranks in the Star Wars pantheon, if not below. The show was, however translated into Chinese. It’s a bit surreal watching Caucasian skaters in eye-popping stage makeup nonsense-lip-synching to Chinese Disney character voiceovers.

As an American it’s even weirder listening to Mickey Mouse himself in Chinese, not least because they nailed the voice. It was spooky. But also, much more than the Chinese audience, I think we Americans have internalized Mickey Mouse as an American symbol. I confess a bit of surprise that Mickey hasn’t replaced the eagle on the great seal of the United States of America. I have clear memories of a T-shirt from 1979 that said, “Hey, Iran!” and featured a cheery Mickey flipping the bird. I’m pretty sure it wasn’t an authorized product, but you never know. Could have been clever licensing. Give that mouse a shield, an olive branch and thirteen arrows and stand the hell back.

But the fact was that Chinese families in droves were handing over 180RMB a head before snacks, beverages and sparkly wands to be exposed to possibly the basest layer of American pop culture. Meanwhile, China is exporting Confucius institutes, ponderous Zhang Yimou films, and a billboard in Times Square that nobody seems to understand. It’s an asymmetrical battle, and probably only going to get more so now that SARFT may be taking steps (zh) to ensure that entertainment television is rendered as unprofitable as possible for broadcasters in China. Am I missing anything?

When Americans are paying $30 a pop to watch Xi Yangyang on ice, then I’ll know China is really getting somewhere. Until then, hakuna matata, dude. 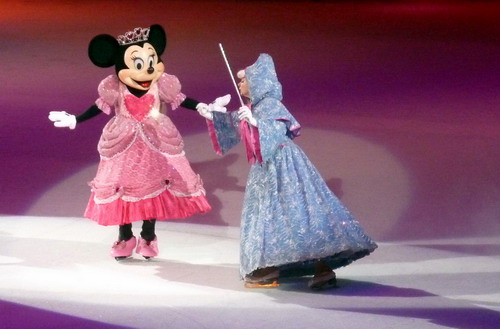 This entry was posted in Uncategorized and tagged China, Parenthood, Pop Culture, Soft Power. Bookmark the permalink.
%d bloggers like this: