Another day, another censorship-related thing to get bent out of shape about here in China.This week it’s the dreaded “Green Dam Youth Escort” internet filtering software, which goes right to the head of the nominee list for the annual Imagethief “branding that translates badly” award. They can collect the statuette, a little plastic model of a Chevy Nova*, at the ceremony, which will be hosted by the auntie who empties the garbage can in my apartment hallway. Watch your mailbox for an invitation. Black tie, please.

Originally reported by the Wall Street Journal and then relayed by the New York Times in somewhat darker terms, the story is that the Ministry of Industry and Information Technology, the IT regulator, will require all computers shipped in China after July 1st to include Green Dam Youth Escort, a client-side Internet filtering program (actually two related programs it turns out, “Green Dam” and “Youth Escort”) . The Journal also published a day-after follow-up with some further industry response and third-party comment. The industry response might best be characterized as weary sighs punctuated with occasional slaps to the forehead when they think no one is looking.

Personally, Imagethief isn’t getting his shorts in too much of a twist over this. Don’t misread me: There is nothing to celebrate in yet another measure of government intrusiveness in people’s surfing habits, or the mandating of the use of what is almost certainly a perfectly crappy bit of software. But I’d say that the net effect of Green Dam Youth Escort on Chinese surfing habits will be close to zero.

First of all, it is unclear whether PCs will ship with the software installed. The Wall Street Journal says that the software need only be packaged with PCs sold in China, and not necessarily installed. Rebecca MacKinnon, on the other hand, has received a copy of what is claimed to be the original MIIT notice calling for the use of the software. Her reading is that the document requires that the software be pre-installed on computers. (See also Rebecca’s initial post on the software.)

Even if Green Dam Youth Escort comes pre-installed, however, it seems like the leakiest of dams. After all, what’s to stop anyone acquiring a new computer from simply doing a fresh reinstall of Windows? Certainly no IT administrator at a major corporation –especially a foreign one– will allow this software on company systems, given its apparent propensity to phone home for poorly documented reasons.

And even a post-purchase reinstall won’t be necessary in many situations as I’m sure any DIY vendor at the highly competitive IT malls will sell you a nicely scrubbed box at your convenience. They’re already willing to sell you pirate software and technically illegal mobile phones, so it’s hard to imagine they’ll let a little thing like Green Dam Youth Escort stand between them and a sale.

Also, this is Windows-only software as near as I can tell (the website is not accessible right now, so I can’t confirm). Will Macs and Linux systems be in technical violation? Or will they be conveniently ignored? What about the increasing number of Internet capable mobile handsets that are on the market? Plenty of palm-friendly (I don’t mean it that way, you filthmonger) yellow content out there for on-the-go types.

The claim is that Green Dam Youth Escort is meant primarily to filter pornographic and otherwise socially objectionable content rather than politically objectionable content. It’s hard to imagine that it wouldn’t be used for both, redundant as that seems given existing censorship mechanisms. But the Chinese government has a well established obsession with limiting access to pornography and similarly nasty content. Hence the periodic Internet-purification campaigns and the regular drip-feed of ghastly stories about Internet addiction, young lives ruined, etc.

Imagethief detects the whiff of a sweetheart deal. Certainly the company that produced the software, Jinhui Computer System Engineering Company, will cash a nice check from the government, which will apparently underwrite the inclusion of the program. But client-side filtering software, even if updated from a central database, is principally useful at an organizational level, such as by a company or household, where policies need to be set locally. If the government wants to set policy for the entire country, then China’s existing DNS, ISP and gateway-based filtering mechanisms are much more efficient and, for all their porousness, harder to circumvent. If Chinese ISPs start denying connectivity to clients not running Green Dam Youth Escort, then I’ll panic. But I don’t see how that’s feasible (and if it gets tried, stand-by for the slap-fight of the century between MIIT and MOFCOM).

Frankly, despite the inevitable hand-wringing and bluster, I wouldn’t be surprised to see the whole initiative vanish quietly after a few face-saving months.

*NB: The Chevy Nova story is actually bullshit, but it lives in legend.

From Malcom Moore’s story on this in the Telegraph, this outstanding quote from the Jinhui spokeswoman:

“This is very good news for users, so they should not uninstall it. It will automatically filter pornographic images and antirevolutionary content. It will not take up much space on the hard drive. It is very stable and we have conducted many tests already,” [the spokeswoman] added.

As if. Also, screenshots here (in Chinese) courtesy of @davesgonechina.

Speaking of handwringing, this quote from the AP’s coverage:

John Palfrey, an Internet censorship expert at Harvard University, described the latest requirements as “a potential game changer in the story of Internet control,” by moving China’s “Great Firewall” closer to the user, where censorship can be more effective.

Game changing indeed. As long as the game is strip-Parcheesi played by monkeys in diapers. I disagree that censorship is more effective when it’s closer to the user. I think it’s more effective when it’s centralized for the reasons described above. Ask the DVD consortium how they feel about device-level security restrictions in China (although it’s an imperfect comparison as the government doesn’t give a crap about DVD piracy). Still, unless something completely unexpected is sprung in the implementation of this software, getting it off of your computer will be about as easy as hitting a dead sturgeon with a fork.

The government and Jinhui both insist it’s not spyware. So that’s OK then, but I notice nobody insists its not crappy software, as alleged elsewhere. Bonus: The Foreign Ministry spokesman claims that China’s internet has always been “open”. Which is true, if by “open” you mean “restricted”.

Also, Bruce Einhorn of BusinessWeek writes about the lack of consultation with the industry over this move, and what that says about the Chinese approach to regulation. 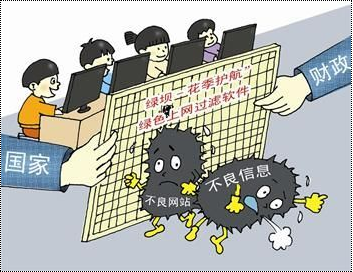 I can’t see any sea cucumbers, but look what Edison Chen’s doing with this girl!