Like on the top-forty radio show Imagethief used to listen to as a thirteen-year old, the hits keep coming in the Sanlu milk powder crisis. Over the past thirty-six hours the situation has evolved from a company-specific Sanlu crisis to a nationwide dairy-industry crisis reminiscent of the glory days of last summer’s product quality crisis.

Here is the latest: Products from 175 dairy companies have been tested (中). Twenty-two of them tested positive. Sanlu is still the champ in terms of micrograms per kilo of product, but some other famous (and not-so-famous) brands are now implicated, including Mengniu and Yili. I bet Yang Liwei didn’t know about this when he decided to endorse Mengniu. But astronauts should be able to digest melamine, which anyway seems like kind of a futuristic substance. Imagethief used to have melamine coasters. No joke. Very “Jetsons”.

Also not a joke is that over 6000 children are now reported to have been affected and three are dead. The Internet is seething. Collars at the State Food and Drug Administration haven’t felt this tight since Zheng Xiaoyu was frogmarched away and shot for corruptionjust over a year ago.

So here are the PR implications:

Winner: Sanlu (sort of)
For Sanlu this is actually good news. All of a sudden what looked like their problem is a nationwide problem in which they are just one of many companies caught in the riptide. In PR we teach an interview technique called broadening. When confronted by an interviewer with a problem or challenge that cannot be refuted you respond by “broadening” the issue to include the rest of the industry, your rivals or whomever. It works like this:

Maria Bartiromo: Your stock price is down by 50% this month? Does your company suck?

Sanlu doesn’t need to broaden the issue. It has broadened itself. This doesn’t make Sanlu’s problem go away. They’re still the worst affected, the most apparently negligent and most closely associated with the issue. In the past day or so, the chicken of accountability (a really big chicken in this case) has come home to roost and heads have justly started rolling. But misery loves company, especially in PR, and now the spotlight of attention has spread out a bit. It buys Sanlu some small breathing space at the trade-off of kindling a hotter but more diffuse groundswell of national anger.

Losers: Everyone else
While this broadening might be good news for Sanlu, it’s bad news for everyone else. Consumers have no idea which domestic manufacturers they can trust. Even ice cream bars (sob!) look suspect. Foreign manufacturers such as Nestle may benefit for a while, assuming resentment doesn’t turn on them later, which is possible. Also, Fonterra is now recalling its own Anmum branded milk in China. On top of its involvement in Sanlu, this may be wearing the foreign gloss a touch thin.

The Chinese dairy industry looks like a hopeless swamp incapable of quality control. Production and upstream wholesaling are completely fragmented and obviously subject to only the most featherlight of regulatory scrutiny or inspection regimes. The job of applying quality control nominally lies with the brands that sit between green fields and cow dung and supermarkets aisles and consumers, but they appear to have dropped the ball completely. Honestly: Twenty-two companies and 66 products? You’d sooner trust the Three Stooges with your dairy factory than this bunch of clowns.

The SFDA looks about as wired as it did in July, 2007. AQSIQ, which is separate from SFDA, is also scrambling. Regulatory involvement seems conspicuously after-the-fact in this situation. Sanlu was exempted from inspection because it was recognized to be such a fabulously well-run company. Lesson: No one should be exempted from inspection. More inspections for everyone, in fact, seems like part of the prescription for this situation.

And China in general reminds everyone else in the world of why they are just a touch suspicious of Chinese food products. There are apparently some export products involved in the current situation, although they are apparently exported primarily to the kind of no-hope client-states (think Myanmar) that are unlikely to make too many waves lest they have to start paving their own roads. But the rest of the world is watching.

As, incidentally, are the (ahem) China-based expatriate parents of small children. I am happier than ever that Imagethief Jr. is breast-fed. Mrs. Imagethief may be made of stern stuff, but it’s almost certainly not melamine.

Now what?
Aside from the fact that Imagethief will sadly never look at an Yili ice cream bar the same way again, what happens now?

Unfortunately, the whole situation has got much trickier. For individual companies PR issues can be managed because it is relatively easy to speak with a single voice. Situations that involve entire industries are trickier, because getting a bunch of competing companies to speak with a single voice about anything is like herding giant cats with tens of thousands of employees each. Cats that often want to blame each other. Try doing PR for an industry association someday and you’ll get a taste of this.

The cat-wrangling hat now passes to the Chinese government, which has just inherited the stage from Sanlu. The Chinese government needs to explain why there is a pervasive problem in the dairy industry and what it is doing to solve the situation. (It would be nice to talk about a plan for structural changes in the industry.) It needs to make sure that the dairy brands themselves are singing the same song with one voice arranged to church-choir perfection. It also needs to keep on letting consumers know which products are safe and which aren’t and ensure that people have enough real and timely information that gossip and suspicion don’t become the main drivers of the public response. It needs to vigorously punish offenders who have been sloppy and do its best to convince people that the companies, regulators and local governments are all entwined in one sloppy, corrupt ball. I know that executions will look tempting, but executions alone probably won’t solve the problem of restoring consumer confidence, so let’s think more creatively than that.

Importantly, if there are more melamine skeletons in the closet it is best that they come out soon rather than creep out over the coming weeks and months. The situation has already deteriorated. The sooner it moves into recovery phase the better. More bad news dribbling out over weeks and months will delay the start of the recovery and stoke the fires of suspicion and anger. This is one reason why it’s important to make sure people have enough real information to forestall the worst of the gossip and conspiracy theorizing. For that reason, AQSIQ’s public round of testing was a good thing, even if the news was bad.

But the whole process will be difficult. In yesterday’s post I mentioned all the entrenched and institutional problems that retard the development of public communication in China. Many of them also serve to slow the development of effective commercial enforcement. In a sense the larger challenge for China is not just to prove that it can clean up the dairy industry, but to prove that its commercial environment can evolve into something other than a cozy swamp where insiders get rich and outsiders get kidney stones.

But that’s been the challenge for a long time now.

Suppressing the news is not a PR solution
Hop on over to ChinaSmack and read the new post “Kidney Stone Gate: Baidu denies censoring search results“, which cites a 21st Century Business Herald report on Baidu’s possible involvement in suppressing negative search results for Sanlu:

Soon after the Sanlu poisonous milk powder news came out, a copy of letter from the Teller public relations firm to the Sanlu Group began spreading on the internet. In the letter, Teller advised Sanlu to pay Baidu 3 million RMB to have Baidu manage search results containing negative news about Sanlu (supposedly not all news could be censored but most results coming from smaller websites could be deleted). When Baidu heard the rumors, they quickly denied working with Sanlu. A representative from Teller also said the letter was fake.

There’s more in the post, including a partial translation of the 21st Century Business Herald article. Some evidence is presented in the story to support the allegation that Baidu was complicit, although Baidu denies it. The jury is still out.

However, the basic PR rule is this: Supressing bad news is almost never a viable PR solution. Bad news tends to leak. It tends to percolate through the pores. It tends to squirt around to wherever your grip is weakest, like the air inside a balloon animal. This is particularly true in the era of the Internet, regardless of what Baidu (or even the government) does.

Only an irresponsible PR agency proposes suppressing bad news as the core of a PR strategy. That’s not rebuilding or defending a reputation. That’s admitting you can’t help. But suppressing news is an old tradition here, handed down from the highest levels. It will be a long time before that kind of recommendation stops coming.

Baidu’s most important value is to seek truth from facts. (百度价值观中最重要的一条就是实事求是)

One would hope so. But I recall that somebody else in Chinese history used to talk emptily about seeking truth from facts. 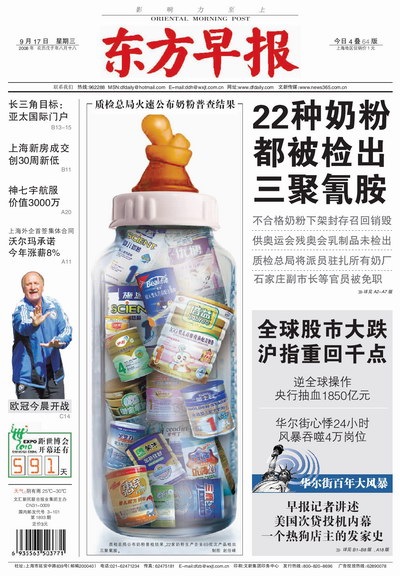