Imagethief was interested to see on the front of the Saturday South China Morning Post a segment of a painting that has just been unveiled in Hong Kong to commemorate the tenth anniversary of the 1997 hand-over of sovereignty. This is no ordinary canvas, mind you. It’s essentially a mural, seven meters by three, with the likenesses of Chinese President Hu Jintao and 500 of Hong Kong’s great and good. Here is the segment that was printed in the paper: 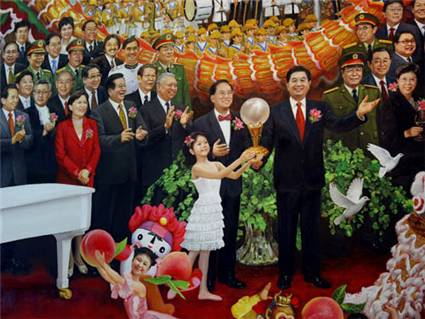 Painted by artist Liu Yuyi, who came to Hong Kong from the mainland in 1991, painting is apparently meant to be inclusive in representing Hong Kong’s political plurality. Nevertheless, there does seem to be something of a pecking order. The (as ever, subscription-only) Post reports:

Tycoons Li Ka-shing and Stanley Ho Hung-sun were among the closest to the state leaders in the canvas.

Some key members of the Democratic Alliance for the Betterment and Progress of Hong Kong and the Liberal Party were also close to the action. Liu, who has lived in Hong Kong since 1991, said he had not yet decided whether to auction the painting, although some interested buyers had contacted him in recent days. “I may just give it to the state,” he said. “And I don’t rule out the possibility of giving it to the Hong Kong government.”

One wonders where they would put it. Featuring President Hu as prominently as it does, one also wonders if perhaps it might need to be updated in future anniversaries, as the face of China’s leadership inevitably changes.

In addition to the placement pecking-order of Hong Kong personalities, two things about the painting struck Imagethief as particularly interesting. First, in composition and palette it resembles a certain famous album cover:

In fact, my colleague Alex, upon spotting the photograph, said, “Hey, it reminds me of Sgt. Pepper!” I am not sure this is the effect Liu was going for. (There’s even a drum partially visible at the very top of the painting.) If you ask me, psychedelic Olympic mascot “Huanhuan”, visible in Liu’s painting, would have fit right in on the Sgt. Pepper cover.

Somewhat more disturbingly, the painting is highly suggestive of Maoist propaganda posters, especially the ones where the Great Helmsman is surrounded by hundreds of cheerful, energetic and well-fed looking Chinese people representing various ethnicities and acceptable segments of proletarian society. For example:

If you’re having trouble reading the tiny caption on this second poster, I believe it says, “The ever victorious Chairman Mao gets by with a little help from his friends.”*

Look at Hu in the painting above again. In the segment I can see, he is the only person who’s body is completely unobstructed. He has the greatest amount of negative space around him. His hand is upraised in beneficence. He’s surrounded by positive symbols; doves of peace, a pearl of harmony (according to the artist — don’t know if that’s accepted symbolism), and peaches of longevity (which are accepted symbolism). He’s conspicuously taller than Donald Tsang (which may be literally true). Intentionally or not, it’s a case study in cult-of-personality iconography. The only difference is that instead of being surrounded by an idealized version of the common people he’s surrounded by an ordered version of Hong Kong’s power elite.