Tank Man’s place amongst the iconic images of my lifetime

In the last couple of day’s I’ve been slowly winding my way through Frontline’s documentary, “The Tank Man“, which is now available online in its entirety. Only the first page is accessible in China, but the rest of the content and the video can be viewed through proxies.

The documentary is interesting, although it projects a bit with regards to what the Tank Man was thinking and why he did what he did. Perhaps that’s inevitable. Part of the power of the image of a lone man in front of a column of tanks is wondering about his motivations. Lack of an answer about that, or about whom he really is, gives the image an enduring timelessness. I suspect it would lose some of its power were he ever identified, and more were he to turn out to be still alive (as happy as that might be). As it is now, people can speculate about his martyrdom, and he can remain a comfortably anonymous symbol rather than an imperfect human being with all the complications that would entail.

Watching the documentary, and looking at the photographs, I was taken back to 1989, when I was a senior at UC Santa Cruz watching those events unfold on television at the end of the school year. China was a remote abstraction to me then, and never would I have dared imagine that I might someday end up living here. But living here gives those events fresh relevance. The locations discussed in the film –not just the square itself, but the surrounding areas and Muxidi Bridge– are all familiar now. In the documentary footage from 1989 I recognized buildings and neighborhoods. From one of my company’s office windows I can look down past the enormous, new Public Security Bureau headquarters and see the north end of Tiananmen Square and the Great Hall of the People. It’s hard to imagine what that view would have looked like 17 years ago.

The documentary also made me consider the enduring power of iconic images, of which the photograph of the tank man is surely one. In a brief discussion with my wife I considered what the other most iconic news images of my lifetime have been. Here the first five that came to mind, in chronological order:

The fall of Saigon (1975)
The swan-song of the Vietnam War. I was seven years old, so my first-hand awareness of these issues was pretty low. But this had been one of the defining events of my parents’ lives so far. My parents had been war protestors, earning me the distinction of being tear-gassed at age two at the Stanford anti-war demonstrations. There are other Vietnam pictures that are extremely powerful, including Nguyen Ngoc Loan’s execution of a Vietcong prisoner during the 1968 Tet offensive, and naked Phan Thi Kim Phuc fleeing her napalmed village 1972, but I was so young when those events took place that they didn’t register at the time. I do, however, remember the end of the war. 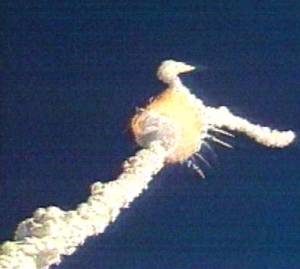 The Challenger space shuttle explosion (1986)
As historical events go this was hardly of global importance. Seven people died and a legion of “substitute teacher” jokes was spawned. But for an eighteen year-old college freshman, all idealism and big balls, it was a lesson in the limits of technological power. That dreadful “Bugs Bunny” cloud has been in my head ever since.

The fall of the Berlin Wall (1989)
This was the other great event of 1989, coming some months after Tiananmen Square. And, thankfully, it was a somewhat happier moment in history. This was something else that we all gathered around the dormitory television set for.

9/11 (2001)
I was watching the live broadcast when the second plane hit, which is what this is a photograph of. That was the moment we all knew that this was something bigger than a single attack, and that it would loom large in American consciousness. And the towers hadn’t even fallen yet. You might ask why not pick a photo of one of the towers collapsing. When I recall this event, it’s the two flaming towers that I always see in my mind first. It’s the threat of disaster that I remember, rather than the disaster itself.

Looking back at all of these images that have stuck in my head over the years, I notice two things. First, every single one is a humiliation of power, in one way or another. The mighty brought low, if only temporarily. Sometimes that’s joyous, as in Berlin, but most often it is tragic. The second thing is that three of these images are of humiliations of American power. But I guess that is to be expected. I am an American, after all, and those will be the images that remain in my head. You savor the triumphs for a while, but you remember the failures forever.

So what images stick in your head?