The undefeated gangster squirrel and other first world problems

I hate a tree.

No one is more surprised than I am. Trees are green and wonderful. I love trees!

The tree I hate is a big Douglas fir, about 100 feet tall. It grows in my neighbor’s yard, right up against the fence along the property line. It is thick and stout and extends half its canopy over my house and yard.

I didn’t start out hating the tree. When we first looked at the house I thought, hey! Nice and shady! Somehow my real estate agent, who was otherwise superb, did not bring himself to say, “You know, it looks great. But I gotta tell you, you’re going to hate that fucking tree.”

It didn’t take long. We moved into the house in November. By December the tree was dropping a continuous rain of desiccated needles and pinecones. The first time I went up onto the roof I thought I’d wandered into a campsite. I swept and bagged and spent a merry afternoon on my hands and knees mucking buckets of rotting needles and cones out of the gutters while trying not to teeter off of the edge and become one of those statistics about mundane things that are actually much more dangerous than terrorism.

The tree has perfected teleportation. It quantum-tunnels inch-long needles into my underwear drawer, under the couch cushions, into my bed, and into the carpet fibers. In summer the tree swaps the needles for drifts of weightless little fir blossoms. These have colonized the house like tribbles. There are always a few stuck to the bottom of my socks.

Shortly after moving in we called an arborist to thin out the fir branches over our property. He also pruned the Japanese maple in our front yard. It turns out you need a Japanese maple specialist to prune your Japanese maple or apparently you risk a diplomatic garden incident. A Japanese maple arborist is exactly like any other arborist, but more fabulously priced. But I don’t hate the Japanese maple because, being Japanese, it’s well engineered and punctual. In autumn it turns bright red for thirty days and then drops all of its leaves in one glorious, crimson sneeze.

The arborist pruned the fir tree ruthlessly, but it didn’t occur to him that, unlike a genteel Japanese maple, a thuggish fir tree would bear a grudge. First, one of the pruned branches pierced my roof, which we discovered during a freakishly heavy rainstorm in December when water started dripping into the master bedroom at two in the morning. But at least that was fixable. More insidiously, the tree leaked great gobbets of pinesap from every knot, nick and stump where it had been pruned.

Pinesap is like a mix of superglue and ground glass. It coats the wooden stairs between our dining area and the garden. It drips onto the skylights and hardens into dusty, sticky little humps that have to be etched off with a putty knife. It gets tracked into the house and leaves indelible pinesap marks on the floors. The cats hate it. It makes gravel stick to their feet. A cat with gravel cemented between its toes is not a happy cat. When it walks across the floor it goes click…click…click…click, and then, when it rabbits its foot against the floor to try to dislodge the pebble, clicketyclicketyclickety. This is funny and tragic in a way that only an aggrieved cat can achieve, and might almost be worth forgiving the tree for. But then the cat sulks away to the bedroom and hides under my comforter where, miraculously, the pebble and any needles also glued to its feet will dislodge so I can find them when I go to sleep. Have I mentioned the satanic combination of pinesap and cat hair?

At this point you may be thinking, hey, asshole, you managed to buy a house in the Valley, so excuse me if I don’t get all weepy about your tree and shit. And you’d be right to think that. In the playbook of humble-bragged first-world problems, this is dangerously close to complaining about having to get your Maserati tuned.

But the tree was the beginning of my education in the dark secrets of home ownership. When you buy your first house you stray into a foggy, rumsfeldian arena of unknown unknowns. Sure, you look for the obvious stuff. Closet space. Appliances. A history of gruesome axe murders. (Don’t laugh – a friend of mine got a deal on a murder house in Potrero Hill.) But if you’ve never owned a house before, there is a whole galaxy of things that simply don’t occur to you.

Crawl spaces don’t occur to you. I have some advice: if your house has a crawl space underneath it, never look there. It’s like gazing at Medusa. Nothing but darkness, hate and serpents. Or, to be more accurate, spiders. I sent an electrician in there to pull some Ethernet cable. It takes a brave and well-compensated man to enter Hades just so I can have better Internet in the bedroom. My strategy for the crawl space is to pretend it doesn’t exist, and isn’t two feet beneath my sleeping body every night. Nope, nothing beneath my head except a concrete slab and the San Andreas Fault, thank you very much.

Rat urine doesn’t occur to you. When we had the house checked, the inspector pointed out that there were some rat droppings on top of the furnace. We had rat-proofers seal up all the gaps, above and below. They also suggested that the old insulation was probably soaked in decades of rat urine. This might or might not have been true, but it definitely stuck in my head. No one wants to spend their nights sandwiched between spiders below and rat piss above. So, new insulation.

Then we had a guy come over to clean years of accumulated pine needles out of the air conditioning unit, which is at fir tree ground-zero and seemed likely to burst into flames. While he was there he checked the inside of the furnace and ducts. Full of rat turds. We’d pretty much been blowing atomized rat turds directly into our faces all winter. You can have a slick Nest thermostat and turn on your heat from another continent, but it’s not smart enough to send a message back warning you that your ducts are a rat outhouse and you’re probably going to die of leptospirosis so don’t bother coming home. For $250 you’d think they could engineer that in.

Squirrels don’t occur to you. And why would they? Squirrels are cute, harmless woodland creatures that eat nuts and stuff. But in the tree I hate there lives a squirrel I also hate. There is no bird feeder that he can’t get to and open. No wire he cannot scale. No barrier he cannot penetrate. He is the Savoir-Faire of squirrels. Which makes me poor old Klondike Kat.

And he has squirrel balls of solid brass. A couple of weeks ago Mrs. Imagethief and I were sitting at the dining room table when we heard a strange scrunching noise echoing through the house. It took us a minute to figure out where it was coming from. The squirrel was sitting on the alley gate under the tree and gnawing on my house. Just gnawing on my fucking house.

The squirrel is pure evil. The squirrel dug up the flower pots. The squirrel ate the strawberries off the vine. The squirrel emptied all of the sunflower seeds out of the bird feeder and then, I swear, he laughed at the birds. This squirrel would shoot a man just to watch him die. If he had opposable thumbs, that is, and not cute little squirrel hands.

I once though of houses as permanent, enduring objects. But now that I own a house, that turns out to be an illusion. The house is really just the contours of the front lines in a foolhardy war that I declared on nature the moment I signed my mortgage papers. Its shape is sustained only so long as I fight. Nature’s arsenal is earthquakes, weather, the tree, the squirrel, the rats, termites, mold, moisture, time and the simple inevitability of thermodynamics. Mine is whatever meager shekels are left in my bank account after a Silicon Valley down payment. In the long run, nature is going to win and claim the house. I win if nature claims me first.

So you can mock this for the privileged rant that it is. But the fact is that, rich man, poor man, somewhere out there is a squirrel with hard eyes and a shiv with your name on it. Maybe you haven’t found him yet.

But you will, my friend. You will. 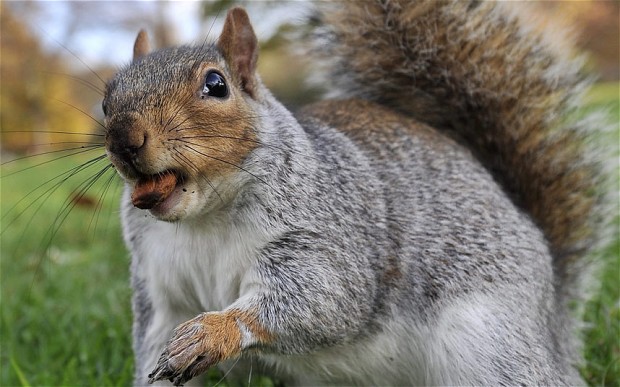 Is that my soul in your mouth?

This entry was posted in Uncategorized and tagged Resident Alien, Silicon Valley. Bookmark the permalink.